Femoroacetabular Impingement (FAI) is the most common underlying condition resulting in labral tears of the hip. The hip joint is made of a ball and socket joint. The ball portion is the femoral head (Femoro-) while the socket portion is the acetabulum (-acetabular).When areas of the femur or acetabulum are somewhat abnormally shaped with bony prominences or spurs, impingement (FAI) occurs.

Essentially, the hip requires a certain amount of clearance between the ball and the socket to have normal pain-free movement. When there is less clearance because of bony bumps or prominences on either side, the labrum (which is the cartilage that deepens and lines the socket) gets worn down and eventually tears as it gets injured by the friction from the impingement. 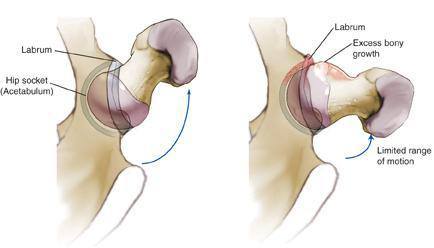 CAM impingement is femoral-sided impingement where the head is not as spherical or round in relation to the neck. With increasing flexion and rotation of the hip, the bump or prominence at the femoral head and neck can cause damage to the articular cartilage of the socket as well as the labrum. Any damage to the articular cartilage is considered by definition the beginning of arthritis. 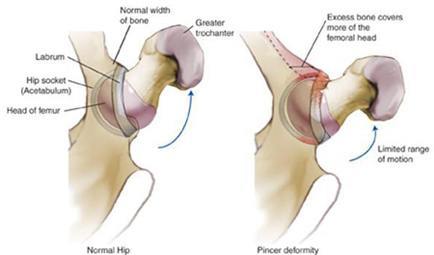 PINCER impingement is acetabular-sided impingement where there is overcoverage of the socket on the head, causing the joint to “pinch”. As the hip is flexed and rotated, the femoral head and neck will abut the acetabulum at the pincer spur, causing tearing of the labrum and associated articular cartilage.

COMBINED CAM & PINCER impingement is what occurs most commonly. This means that there are components of impingement on both the head and socket that results in decreased clearance of the joint. 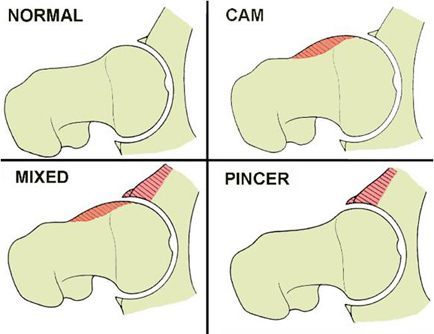 Will physical therapy or a cortisone injection heal or fix my labral tear?

No. Physical therapy may give symptomatic relief either temporarily or for an extended period of time, but it will not repair or heal any torn labrum or cartilage.
A cortisone injection is very useful in confirming the diagnosis of hip pain, but any relief should be considered temporary.

Can I receive multiple cortisone injections into the hip?

A first time cortisone injection into the hip joint is very useful in confirming the diagnosis of a labral tear. One injection is considered relatively safe. However, cortisone is a steroid which can have deleterious effects on the joint and soft tissues with repeated exposure. Therefore, multiple injections are not recommended.

Why is there pain with FAI?

Over time, impingement of the hip will lead to a labral tear, which results in pain. The pain is most typically present as groin pain, but may also present as pain laterally or in the buttock. If the impingement is significant with large spurs and there is a large tear of the labrum, the patient may also have decreased flexibility and range of motion. An untreated labral tear and FAI will eventually lead to early arthritis of the hip as further damage will occur to the labrum and articular cartilage over time.

What is done for FAI with arthroscopic surgery of the hip?

At the time of surgery, the camera inspects the whole joint for damage. Typically there is a tear of the labrum with associated articular cartilage damage. The labrum is carefully detached from the socket at the area of tearing to identify any bony pincer impingement. If an acetabular spur is identified, it is resected using a high speed burr. The labrum is then repaired to the acetabular rim (which has already been resected) using suture anchors (small plastic screws that are securely fixed to the bone so that sutures from the screws can reattach the labrum to the bone). Once labral repair is completed, the femoral neck is inspected, and any prominence or cam impingement is resected with a high speed burr.

What happens if arthritis is more significant than suspected at the time of surgery?

Hip arthroscopy for labral tears and FAI is very successful in restoring patients’ quality of life except in the case of advanced arthritis of the hip joint. In certain cases, arthritis is further advanced at the time of surgery than what was suspected from the patient’s pre-operative diagnostic work-up. In this situation, labral repair and bony resection for FAI is still completed. However, results post-operatively will be variable because arthroscopic surgery cannot successfully treat any pain resulting from arthritis. 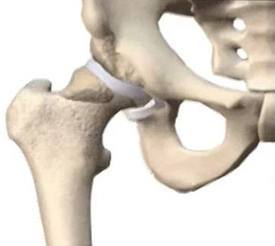 Guidance prepared on behalf of the International Society for Hip Arthroscopy (www.isha.net) 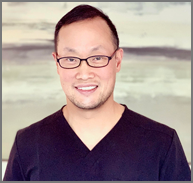